Here’s a million-dollar question in the world of digital marketing: Are marketers buying ads on the right channels?

More and more money is being spent on digital marketing and advertising by companies, businesses and organizations. According to Canadian Marketing Association and Ipsos, brands in Canada spent 71 per cent more on social media advertising in 2017 than they did in 2016. The growth in social spending is expected to continue.

But how effective are they in getting their message across to the right people?

Facebook has become the go-to recommendation for ad spending by many industry experts.

In an August 2017 report by research firm eMarketer, senior-level communications and marketing professionals in Canada said Facebook was the most relevant/important social media channel to their company’s brand content strategy. It was cited by 77 per cent of those surveyed. Twitter came second, at 60 per cent; Instagram 49 per cent; LinkedIn 43 per cent; and YouTube 11 per cent. 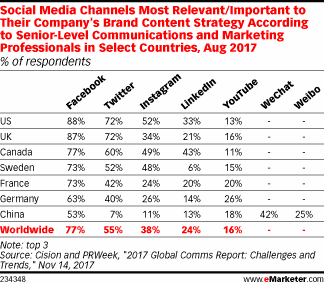 But experts say Facebook is not always the best option; it depends on your target audience.

An eMarketer article called Canada Social Media 2018: The Platforms Grabbing Social Ad Dollars, states that in cases where the target audience is young and campaigns are driven to immediate outcomes – like quick-service restaurants or retailers sending coupons – “Instagram tends to be the go-to platform.”

“What is your audience and what are your goals?” says Paterson, a social media manager at the University of Calgary and an instructor in Continuing Education.

“There are specific audiences that work better on specific channels,” she says. Marketers then need to determine what deliberate action they are encouraging through advertising.

“Is it clicks to your website? Is it video views? Is it some kind of other consumption of content? What specifically are you trying to get them to do? From that, look at what format of content makes the most sense and from there you can build out your ad budget.”

Demographics can also help determine how to allocate a spend. What is the profile of someone who uses Facebook regularly or LinkedIn or Twitter? Why do certain people gravitate to some channels more than others? What group is on what channel most often?

“Pair your research on broader social media usage demographics with what you know about your target audience,” says Robin Eldred, director of advertising at Communicatto Inc. “Having a clear picture of who you are trying to reach, and what their motivations and influences are will help you select the right channel.”

Paterson recommends starting small and then scaling up.

Paterson says many companies, organizations and businesses don’t get it right on digital marketing.

“My course is packed because people want some advice. (They tell me) this is part of my job now.”

The key is to do your research and make sure your advertising dollar is being spent strategically, to ensure it hits the target audience.

A lot of people use Facebook because it has a large user-base, a wide demographic profile, and it’s affordable, she says. A little research on your audience, however, might determine there are better places to spend your hard earned ad dollars.