CALGARY, AB, May. 8, 2012/ Troy Media – Many hands make light work. It turns out that old adage applies to more than just barn raising and yard clean up. In the digital world it can apply to financing, lending, production and who knows what else?

Last week I helped a client re-do their visual identity. They had gone through the usual process of finding an agency, doing all the brand audits and focus groups and brand pyramid stuff, only to be disappointed with the outcome. Strangely, the agency wouldn’t bend on their creative vision. 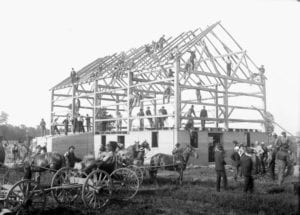 As you might imagine, clients do not tolerate stand-offs well, so that ended as one might expect – with the client moving on to their next potential solution for rebranding.

I suggested we crowdsource their visual identity.

We signed them up to a service I have used successfully before called Crowdspring.com. In the Crowdspring website you write up a creative brief, put some money in escrow (we put up $650, a pittance compared to what you usually pay for a logo), invite artists to bid on your project and then watch the logos roll in.

Some submissions are garbage, some are brilliant, the majority are in between, but here’s the thing – the longer the project goes on, the better the submissions get. Why? Because as the client you vote and comment on each submission and everyone sees your feedback, so the artists get more and more attuned to your needs as the clock ticks down to your two-week deadline.

Even if we hated every single entry (currently at 164 submissions) flushing $650 is a lot easier to stomach than firing another agency and wasting the $5,000 or more they took along the way. And if this doesn’t work out, I can steer them to the good agencies that I know well and avoid the whole standoff trap. Either way the client wins.

This wasn’t the only way crowdsourcing came up recently. Another client was asking about Kickstarter which, according to Wikipedia is “One of a new set of fundraising platforms dubbed ‘crowd funding,’ . . . Kickstarter facilitates gathering monetary resources from the general public, a model which circumvents many traditional avenues of investment.”

Kickstarter describes itself as “a funding platform for creative projects” where you can “fund and follow creativity.” Think books, movies, calendars, but also websites and gadgets. The most famous of Kickstarter projects is the Pebble, a watch that will communicate with your iPhone or Android. 56,983 backers funded the development of this Dick Tracy-like watch to the tune of $8.5 million. Possibly the nicest book of pre-orders any watch has ever seen.

Tapping the crowd for artwork or money is all well and good, but what else is crowdsourcing being used for? Market intelligence, as it turns out.

Take Calgary’s own Chaordix. From their website “Chaordix is the global standard in crowdsourced market intelligence.” While Chaordix has been working with major international brands such as Orange UK, American Airlines and P&G, they also did some local work for Calgary’s Gienow Windows and Doors. Gienow “invited Canadians passionate about renovations to participate in their ‘Gienow Pulse’ community where participants engaged in innovative discussions around home renovations.”

The result? Gienow walked away with a bunch of new product and service ideas that may make all the difference in the hyper-competitive windows and doors industry.

Crowdsourcing has been going on for ages. Wikipedia notes Planters Peanuts held a contest in 1916 to create their logo. The Amish, and presumably others, have been raising barns by harnessing the power of the community for some time.

Now we have the Internet and software to tap the crowd for artwork, labour, funding and ideas. How will you tap power from the people to improve your business?