It’s in the numbers: Your business has to be on social media

Chances are your business or organization needs to talk to people in the outside world. So why not meet those people where they are spending their time. If you haven’t made the leap into social media yet, we have a few compelling reasons why you should consider diving in.

Connect with your audience

Canadians are signing on to social media with increasing frequency. And if you’re not there, your business is at risk of getting left in the dust.

The State of Social Media in Canada 2017, a report produced by the Social Media Lab at the Ted Rogers School of Management, Ryerson University, underscores the point.

“Today, billions of people around the world are turning to social media to socialize, conduct business, keep up with the news, as well as discover, discuss, and share information. The significance of this global adoption of a relatively new communication and information technology cannot be overlooked,” states the report.

According to the Social Media Lab, Canada has one of the most connected populations in the world. Social media is now a part of most Canadians’ daily routine. In fact, 94 per cent of Canadians have an account on at least one social media platform.

“This makes it critical for policy makers, researchers, and others to have a better grasp of what social media platforms Canadians are using to connect and converse with one another.”

Here are some of the interesting things found in the research: 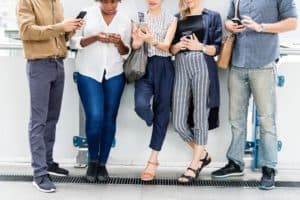 It’s not just retail companies who can reap the rewards of a well-executed social media program. According to a marketing technology company Grazitti Interactive, the top benefits of using social media for marketing purposes include:

If one of these benefits correlates to a communication or marketing goal for your organization, regardless of industry or sector, social media can be a valuable tool in moving your business forward.

All of this data points to one thing: social media has become the communication tool of the 21st century.

Samantha Paterson, a social media manager at the University of Calgary and an instructor in Continuing Education, says the groups that are even younger than millennials have grown up in the age of social media.

“Social media is as familiar to them as a Google search engine. It’s just always been a part of their lives, especially older channels like Facebook,” says Paterson.

This demographic is often referred to as Generation Z, or Gen Z. One of the hallmarks of this generation is that they have had internet technology available to them since a very young age.

Now, you might be saying this generation has little impact on your business. And that is where you are mistaken. Consider that this cohort was born between 1995 – 2012. This makes the oldest of them 23 today. Which means they are entering the professional workforce, have increasing disposable income, are socially aware and are old enough to vote.

If your organization is recruiting new employees, selling a product or service, or advocating for your industry, you need to start paying attention to the needs of this generation.

“You have to seriously consider resourcing part of your energy to social media. Not everything but it definitely merits focus. It is where people are.”

And it’s where they expect you to be.

Paterson says content strategy is key to capturing the attention of your audience on social media.

“I call it stickiness. You’re scrolling, scrolling, scrolling. What causes you to put your finger down and stop on your phone? What captures someone’s eye or captures their attention? Internet is a very, very noisy place and it’s what you’re doing to cut through the noise and capture someone’s attention that is important.”